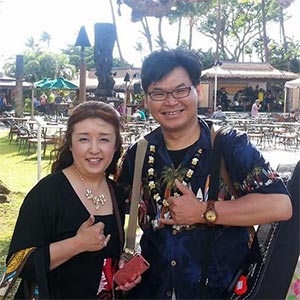 Shinichi Kakiuch is a steel guitar player from Fujimino City, Saitama Prefecture, Japan. He has been playing the steel guitar since 2008. His band NuiLoa has played for a local halau since 2010, learning the music the halau dances to. He has also developed steel guitar solos of hula songs to play between hulas and has provided support to the Bobby Ingano School of Japan since 2013.

Shinichi with his wife Kumiko performed at the 2014 Maui Steel Guitar Festival. He has also performed at the HSGA Japan Festival in September 2014, and plans to participate in the in HSGA Waikiki Festival following this year's Maui festival, in May, 2017.

Besides the steel guitar, Shinichi also studies guitar, 'ukulele, and vocals. As a hobby, he likes to experiment with different settings on the steel guitar and 'ukulele.