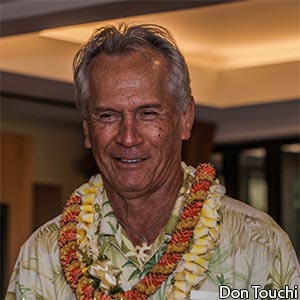 Kimo Kahoano was born into a very modest surroundings. He is the oldest son of a total of 3 boys and three girls. Part of his talents were highlighted nighty as he "awed" audiences time and time again as one of Hawaii's top Polynesian fire knife dancer. His training in other avenuesincludingg dancing, in which he was featured in some of the hottest live nighttime dinner shows in Waikiki. But Kimo's talents didn't end there. He quickly showed the decision makers that he clearly had a very versatile voice that audiences easily warmed to. So since the 70s, Kimo the fire knife dancer and a top cast member in Waikiki's nightlife, had added acting to his resume including featured roles in Hawaii Five O, One West Waikiki with Cheryl Ladd, Hawaii the latest NBC drama, and numerous guest appearances in other TV shows and movies. He co-hosted Hawaii television show "Hawaii Stars" with Carole Kai.

In addition to being the announcer for various events including the annual Merrie Monarch and Prince Lot Hula festivals, Kimo is always in demand as a celebrity emcee and hosts a weekly radio show on Hawaii radio AM940 called "The Aloha Friday Morning Show." He is married to Kumu Hula Leilani Kahoano.