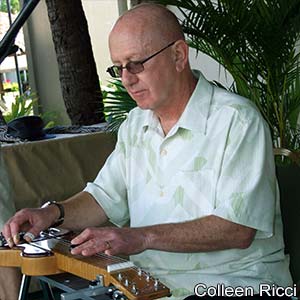 Ralph was born and raised in New York City, where there isn't much Hawaiian music or steel guitar to be found. He started playing the guitar at an early age and continued for many years. By the time Ralph and his wife, Karen, were married on the beach at Wailea, in 1989, he was no longer actively playing any music. It wasn't until twenty years later, when he was past 60, that he discovered the beauty of the steel guitar and the rich tradition of Hawaiian music. Ralph has been studying with his teacher, John Ely, through Skype lessons, for the past four years. He made his steel guitar stage debut at the 2014 Maui Steel Guitar Festival.

In his spare time, Ralph is a Director of Real Estate for the retailer Bed Bath & Beyond.