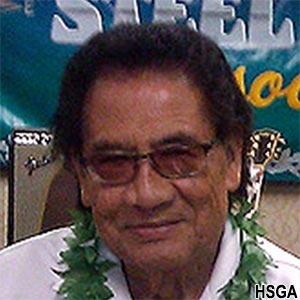 Duke Kaleolani Ching was born and raised in Hawaii. His musical career began at a very early age after receiving his first instrument as a birthday gift. By age 15, he was performing for a wide variety of audiences. He was selected as a member of an elite Hawaiian entertainment group who later toured the US mainland. Upon his return to Hawaii he continued to pursue his musical skills and eventually joined Don Ho's group playing at Honey's Cafe in Kaneohe. At that time he also played at the Barefoot Bar at the Queen's Surf in Waikiki.

Duke has performed with Hawaiian greats Gabby Pahinui, Barney Isaacs, Benny Kalama, Sonny Kamahele, Walter Mookini and Genoa Keawe. Duke also performed with Danny Kaleikini, Gary Aiko, Kaipo Asing, and many other contemporary steel guitarists. Duke has his own style of playing, favoring the old Hawaiian traditional tunes and perpetuating the sounds of Hawaii Calls, the late Barney Isaacs, and his uncle, the late Jules Ah See. Duke has released several CDs including Paradise Isle I, II and III. In addition he recorded The Best of Paradise Isle 1 & 2. In 2009 fellow steel guitarist Greg Sardinha and Keala Records produced Hawaiian Steel Volume 5 featuring Duke Kaleolani Ching. In addition to his performances, Duke has produced the HSGA luau show for many years. In 2015 he was the guest of honor at their Fort Collins, Colorado, annual convention. Duke now lives in Southern California and performs in the Southern California area including Palm Springs, Los Angeles and Orange County.