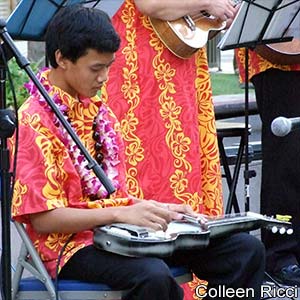 Keen, 15 and a sophomore in high school, started in music at age 7 with the piano. He was drawn to the steel guitar, because of its sound, after seeing it on a television show featuring Hawaiian music. After two years, Keen finally persuaded his dad to get him a steel guitar.

According to Keen's dad, it has been Kumu Alan Akaka who has made Keen's dream a reality. Over the past 4 years Kumu has imparted upon Keen the ability to make that instrument produce the sounds he heard on the television show.

Through Ke Kula Mele and his Hawaiian Ensemble class at school Keen continues to pursue learning other musical instruments including the ukulele, acoustic and bass guitar.

Keen challenges himself to pursue excellence not only musically but also spiritually, academically, athletically and by having fun. He belongs to the youth group at his church and actively volunteers his service to the church. Academically he constantly pushes himself to assimilate as much information he can from his classes. He has participated with the math, underwater robotics, and medieval clubs in co-curricular activities. Athletically he is an integral part of club and school teams in bowling, soccer, and track and field. He is in the final stages of achieving his black belt rank in Shotokan Karate. For fun he pursues mastering the art of the yoyo and the latest electronic games.