The 2015 Festival will be held at the Ka'anapali Beach Hotel on April 24-26, 2015 and will include a format developed at the 2014 festival, with Open Stage performances, Ho'olaule'a, and public Jam Sessions on both Friday and Saturday nights. The lineup of featured performers will be posted here and on the festival's Facebook page as soon as it is finalized.

Saturday Workshops will be given on various musical and cultural topics of interest, including Steel Guitar Instruction, 'Ukulele Instruction, Slack Key, Recording Methods, Playing Techniques, Hula, Hawaiian Style Singing, Lei Making and carving. Information about the workshops will be posted when it becomes available.

Public "kanikapila" jam sessions will be held on Friday and Saturday nights and hosted by the master steel guitar players. Everyone is invited to participate and play along with the featured players and festival guest musicians. 2015 Jam Sessions will be unplugged without a house sound system. Musicians are advised to bring their own amplifiers if required.

Open Stage sessions will be presented on both Friday and Saturday from 10:00 to 4:00. These sessions will feature steel guitar players from Hawaii, all over the United States and the world in half-hour playing sessions. The players will include Joel Katz from Hawaii, Chuck Hughes from Colorado, Jack Aldrich from Washington, Ron Carter from New Zealand, and Shinichi Kakiuchi from Japan, as well as Japanese groups Lohi Lohi and Na Kanaka. In addition students from three Steel Guitar schools will perform. Students from Alan Akaka's Ke Kula Mele Hawaii School of Hawaiian Music, Japan's Lion Kobayashi, and Joel Katz's Hawaiian Steel Guitar class from the University of Hawaii-Maui College will perform at various Open Stage sessions. Please consult the program for exact times.

Other festival features include lobby entertainment by Joel Katz and a display of vintage steel guitars courtesy of Geri Valdriz. Festival T-shirts will be available for purchase at the festival information booth, as well as artists' CDs and festival posters. Information on the Asher Guitars and Lap Steels Alan Akaka Master Built Series 8-string Lap Steel Guitar will also be available at the information booth. 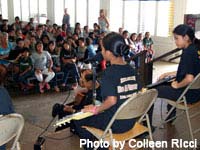 School visitations are a very important part of the Festival not commonly seen by the general public. Presentations are made by festival teams comprising some master players, students, and other musicians. These teams, upon invitation, travel to various Maui schools at all levels from elementary to high school and present an educational and musical program that introduces attendees to the Hawaiian Steel Guitar. At the end of the presentation, attendees are invited to ask questions and try out the steel guitar if they desire. Shown here: 2014 school visitation to Kamehameha III School.

Copyright ©2015 by Hawaii Institute for Music Enrichment and Learning Experiences, Inc., and Cyberventures Unlimited.Terms of Use