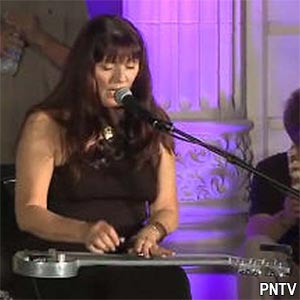 From primal rhythms to Philharmonic orchestration, Hawaii's music becomes a recitation of its history. Grounded by tradition, artists are free to explore the breadth of music's evolution. Owana Ka'ohelelani Salazar holds citizenship in both worlds. Her royal ancestry is the cornerstone of Owana's life; a mantle she wears proudly and responsibly.

A true Keiki o ka 'Aina—Child of the Land, Owana was raised on the island of O'ahu where she was mentored in music and ancestral history by her mother, High Chiefess Helena Kalokuokamaile Wilcox Salazar. Her extensive royal lineage includes her great-grandfather Honorable Robert Kalanihiapo Wilcox, Hawaiian patriot who led the counter-insurrection against the Bayonet Constitution of 1887, who later became Hawai'i's first delegate to the U.S. Congress in 1900. Her great grandmother was Princess Theresa Owana Ka'ohelelani La'anui, direct descendant of Keoua Nui, father of King Kamehameha the Great.

As music's landscape continues to evolve, so does Owana's desire to embrace its diversity, reinventing her self along the way. As a respected vocalist, kiho'alu artist and steel guitarist not withstanding, it is sharing aloha with her audience that distinguishes her as a genuine peoples performer. Owana's multiple talents allow her to create fusion between styles of traditional and contemporary Hawaiian and jazz performance without compromising the character and integrity of each composition. Her musical interpretation successfully navigates through different performance styles, reaching out to intimately embrace her audience.

Beyond music, Owana was tutored in Hawai'i's native dance by hula icons Hoakalei Kamau'u Ho'oulu Richards, Winona Beamer, and Kepa Maly. The Kamehameha Schools, renowned as a training ground for aspiring musicians, helped develop Owana's burgeoning talents. More formal education in music theory at the University of Hawai'i followed, where she first experienced the world of Ki Ho'alu (slack key guitar.) In 1992, Owana was the only woman graduate in Hawaiian steel guitar from the "Master of Touch and Tone" Jerry Byrd. In 2004, she became the first Native Hawaiian invited to perform at the prestigious New Orleans Jazz and Heritage Festival. Owana has performed on countless stages throughout the U.S. and beyond.

Her innovative fusion of music theory with her myriad of skills honed by years of application makes Salazar one of the most influential performers on Hawai'i's music scene today.