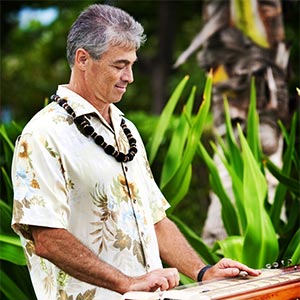 Joel Katz has performed professionally on Maui for 25 years, as a pianist, as an accoustic guitarist and as a steel guitarist. For twenty years Joel Katz has also been the guitarist, keyboardist, and musical director for Jimmy Mac and the Kool Kats, Hawaii's premier convention show band. His playing style focuses on Hawaiian-style steel guitar classics but also includes some jazz and pop tunes. For your listening enjoyment, Joel has released a CD, "Hawaiian to Jazz" which contains various selections from traditional to contemporary.

Joel is also an instructor in the guitar, ukulele, and audio technology programs at the University of Hawaii Maui College. He also is the head of the award winning Seaside Recording Studio. Joel is passionate about carrying on the tradition of the Hawaiian steel guitar and playing style. See his website for samples of his music and more information.