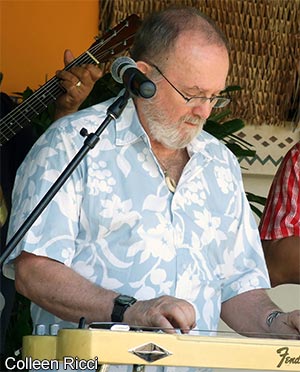 Jack Aldrich has been a musician since he started playing piano at the age of ten. He switched to sax and clarinet through high school. Encountering the "Great Folk Scare" of the 60's, Jack began playing traditional banjo. He taught at McCabe's Guitar Store from 1970-80, and, during that time, won a bunch of contests. Along the way, he also picked up bass and guitar and kept at jazz piano. Jack worked as a musician in Los Angeles while going to UCLA to avoid the draft. He ended up with a PhD in Electrical Engineering, which has kept him and his family fed over the years. In the mid 70's, while playing bass in rock and country bands, Jack fell under the spell of the pedal steel guitar. By the late 70's, he was working in a country band. He moved north to Eugene, OR where he played steel and keyboards full time for 4 years. Realizing that he needed a retirement plan, he moved to Seattle, where he has been employed by Boeing as an engineer and has played steel and keyboards in several bands. Jack retired in 2008 and has been a full time musician and music teacher ever since. Hawaiian music has intrigued him, starting with a gift of The Gabby Pahinui Hawaiian Band in 1978, and, introduced to the Seattle Hawaiian scene by his friend Kory Tideman, he switched to the Hawaiian steel guitar and ukulele. He is active as a sideman in several Hawaiian groups, and he goes to Oahu at least twice a year to learn from Alan Akaka, sit in and play, and to listen to as many groups as he can. Jack has attended and played at all previous Maui Steel Guitar Festivals.